The Painful Trap of Unreasonable Expectations

At least I used to. There was a time in my life where there was no room for gray areas. Everything I experienced had to pass through that determining filter, absolutely everything and in every area of my life; my self-image, my marriage, the people I interacted with, their words, attitudes and personalities.  Everything.

Something was either good or bad; it was either for me or against me.  Everything had to be that clear and that logical, and I was the judge of it all.  If something didn’t follow that logic internal panic would ensue.  Like a computer that’s running a faulty program, I could almost sense my brain throwing out an error. “Does not compute.”

Stern in my ways, self-righteous and judgmental, I would scorn at others who would speak or behave in a manner that wasn’t up to my standards. But I wasn’t this way only towards others.  I acted this way even towards myself.  I measured myself against my own standards, and many times – many times – I failed miserably; because you see, I am human, and as a human being I made mistakes.  As a human being, I often landed in those gray areas for which I had no room or tolerance.  Being a perfectionist at heart, this made me feel angry and bitter, both at myself and at the world.

My perfectionist attitude led me to have unreasonable expectations of me and of the people I loved the most.  I would compare their behavior against impossible standards without taking into consideration the countless variables that could affect them; and then I held them accountable for failing to meet my expectations.

As a result of this, I became unlikable and disagreeable. Not a fun person to be around.  Friendships were practically non-existent.  My own wife avoided me because she never knew when I was going to tell her that she had failed to meet my expectations or didn’t measure up against my impossible standards yet again; I had done that so often, you see.

I almost lost my marriage because of this and that was my wake up call.  I remember the day like it was yesterday.  After she had announced to me that she could not take it any longer and was thinking of leaving, my whole world was turned upside down.  I demanded to know why she would consider ending our marriage after we had spent so many happy (in my opinion) years together.  Granted, I knew that they weren’t perfect years, but they were happy for the most part, weren’t they?  When she listed her reasons my heart sunk. She spoke of the pain and fear that my attitude caused her.  She told me how she felt like she was walking on eggshells when she was around me.  And she told me that as a result of this, she felt like she no longer loved me.  I could no longer hold the stern, unyielding mask that I had been wearing all those years, and I felt it crumble to pieces.  How fragile it was.  How tired it had made me.

It’s as if the blindfold that I had been wearing for as long as I can remember had suddenly been removed.  I suddenly had great clarity and saw for the first time just how much pain and stress I had unintentionally caused her.  I also saw how difficult and how stressful I had made my own life.

This was the beginning of my – our – recovery process.  I had already been working on other aspects of myself that were more obvious, but this one I hadn’t even thought of because up until that point I didn’t see it as a problem.  Rather, I saw it as a good thing, an intention to strive for excellence.  The recovery process wasn’t easy or quick.  Much time passed before my wife and I felt emotionally connected once again, before she even felt comfortable being around me once again.  And I can’t get tired of expressing how grateful I am that she stuck around and gave me another chance.

Since then I have learned that there is nothing wrong with striving for excellence, but that we must remember our individuality.  We must allow each other the ability to walk our own path.  The concept of excellence is not absolute, because each person’s standards vary greatly from the next.  Who’s to say that my standards are better? Then again I would not like it if someone else judged me according to their standards, and certainly not without walking a mile in my shoes.

I can only look at myself, my journey, my abilities and my limitations, and even then my reaching for excellence should be based solely on my effort, and not on the results that are produced.  When things don’t turn out the way I expected I now ask myself this question, “Did I try my best?”  If the answer is yes, I am satisfied even if the results are not what I wanted.  If the answer is no, rather than beating on myself for it I remind myself that I am human, and make it a point to do it again perhaps trying a different approach.

Needless to say I am a happier man.  Rather than judge, I now support those around me in their own journey.  Rather than criticize I now look for the good in a person or situation. Not only does it free them from being held prisoners of unreasonable expectations, but it frees my heart to allow more love to flow. 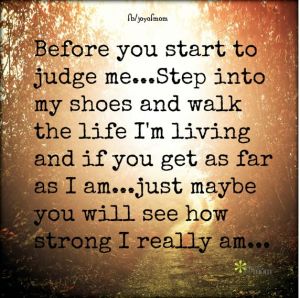 One thought on “The Painful Trap of Unreasonable Expectations”